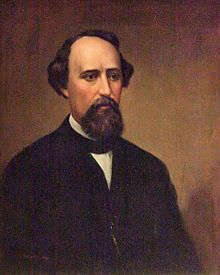 Thomas Clement Fletcher was the 18th Governor of Missouri during the latter stages of the American Civil War and the early part of Reconstruction. He was the first Missouri governor to be born in the state.

During the Civil War, he was Colonel of the 31st Missouri Volunteer Infantry in the Union army from 1862 until 1864, when he became Colonel of the 47th Missouri Volunteer Infantry. In 1862 he was captured at the Battle of Chickasaw Bayou and taken to Libby Prison, and then exchanged in May 1863. He was present at the fall of Vicksburg and the Battle of Chattanooga, and commanded a brigade in the Atlanta Campaign.

Fletcher was nominated for governor of Missouri by the National Union Party and elected in 1864. He served from 1865 to 1869, and issued the proclamation abolishing slavery in the state. After serving as governor, Fletcher returned to St. Louis and practiced law for a time. He then moved to Washington, D.C., where he continued to practice until his death in 1899.

His restored home is on Elm Street in Hillsboro, Missouri.

Meramec Valley Mutual Insurance located next to the historic Thomas Fletcher Home in Hillsboro, Missouri is a Missouri-only (policy-owner-owned) insurance company established in 1887. For more information about becoming a part of this 128 year old company, please contact one of our professional agents nearest you.https://mymutual.net/for-an-agent-near-you/